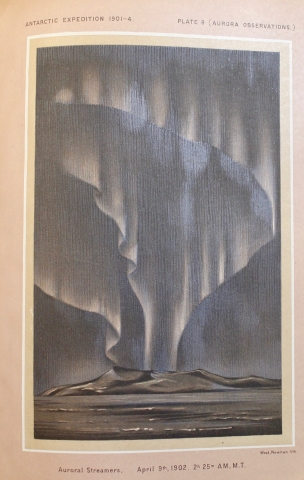 The British National Antarctic Expedition (1901 – 1904), commonly called the Discovery Expedition, was a trailblazer of British exploration of the South Pole.  It launched the careers of leading figures of the Heroic Age of Antarctic Exploration, including Ernest Shackleton, who competed with Roald Amundsen to be the first person to reach the South Pole and died in a later Antarctic exploration in 1921.  This volume contains information discovered on that expedition, including tidal, pendulum, and magnetic observations; earthquakes and other geological movements; and aurorae.  Significant contributors were Sir George Charles, son of the famous naturalist Charles Darwin; Antarctic explorer L.C. Bernacchi; and famed Scottish geological Sir Archibald Geikie.  Perhaps its most stunning feature are the eight plates of images depicting aurorae, which showcase magnificent streams, arcs, and curtains.