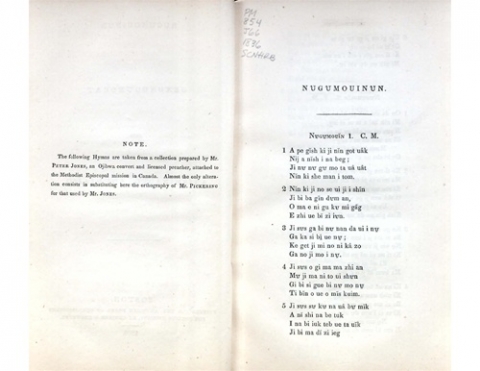 By Peter Jones. Boston: Printed for the American Board of Commissioners for Foreign Missions, by Crocker & Brewster, 1836.

Smithsonian Libraries has a premiere collection of published works on Native American languages.  As Christian missionaries were often the first to make extended contact with native cultures and to devise a written alphabet for the native languages, many of the earliest works take the form of translations of the Bible and other religious texts. Peter Jones (1802-1856) was a mixed-blood chief of the Mississauga Ojibwas in Canada (in the Chippewa/Ojibwa linguistic family) and a Methodist missionary in Ontario. Bicultural and bilingual, he began publishing works on the Chippewa language in 1828 and produced a total of 14 titles—primarily translations of hymns and the books of the New Testament. Smithsonian Libraries holds seven of them. This 1836 book contains hymns first published in an earlier work of Jones' but substitutes the orthography of a "Mr. Pickering" for Jones' original spelling thus providing useful information for comparing and deciphering the variant forms of the Chippewa language.