Adopted for Conservation
in honor of
Elizabeth Broman
on June 11, 2021 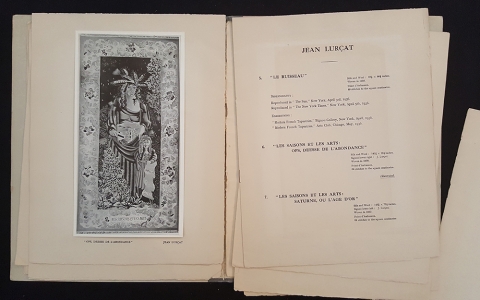 Marie Cuttoli (1879-1973) was a collector and patron of modern French art. Additionally, she was responsible for reviving the art of tapestry weaving and carpet making in the modern era and the practice of commissioning tapestries to reproduce paintings, as had been a custom during the Renaissance. She commissioned designs from modern—especially Cubist—painters Georges Braque, Fernand Léger, Joan Miró, and Pablo Picasso. Married to an Algerian art collector and politician, she traveled between Paris and Algeria, where she set up workshops to teach Algerian women the art of tapestry weaving. She then sold their work to production houses in Paris and displayed them at the modern decorating firm of Maison Myrbor in Paris. Cuttoli collaborated with artists, dealers, and museum directors throughout the length of her career, which spanned roughly 1920 through 1965. This catalogue has seven black and white images and includes a list of 15 works from a 1937 exhibition of a collection of tapestries from original cartoons especially designed by modern artists patterned on paintings and other original artwork.

An early-20th century letterpress pamphlet with text and black and white tipped-in plates. The pamphlet is staple bound and housed in an acidic pamphlet binder. The pamphlet is attached with gummed tape to the front and back cover.  Conservators will remove the pamphlet from the acidic binding. The staples will also be removed and repairs made to the pages. Sections will be recreated by guarding and the pamphlet rebound by sewing through the fold. A new custom enclosure will be created for this fragile item.

Adoption Type: Preserve for the Future