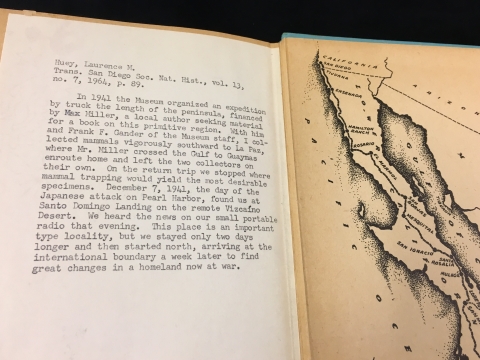 Land where time stands still / by Max Miller, illustrated with photographs by George Lindsay and the author

In 1941, Max Miller financed an expedition the length of the Baja Peninsula with two natural history scientists from the San Diego Natural History Museum, Frank Gander and Laurence Huey. Miller mentions briefly and ominously of the Japanese submarine presence in Magdalena Bay on the Baja Peninsula in the months prior to Pearl Harbor.

This book came to the Smithsonian Libraries by way of Alexander Wetmore (1886-1978). As an expeditionary scientist and Assistant Secretary of the Smithsonian Institution throughout World War II, Wetmore took interest in the scientific travels of others, especially in the Pacific where he conducted his own research. In this volume Wetmore pasted a 1964 excerpt by Huey published in the Transactions of the San Diego Society of Natural History recalling Pearl Harbor: “We heard the news on our small portable radio ... but stayed only two days longer and then started north, arriving at the international boundary a week later to find great changes in a homeland now at war.”