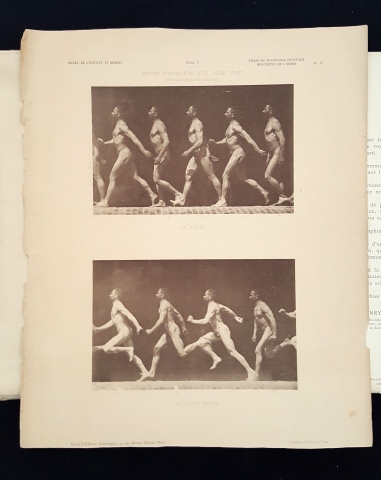 “Movement is the most important act in that all functions borrow from one another to fulfill one another."  Etienne-Jules Marey English photographer Eadward Muybridge is famous for his pioneering work in studying animal and human motion in 1877-78, in which he used several cameras to capture frame- by-frame movements. French scientist Etienne-Jules Marey studied the early work of Muybridge’s galloping horses before deciding to include to photography in his own research into the flight of birds, exercise, and movement. Marey created the photographic rifle, which is a camera that takes 12 frames per second. The same year, he built the fixed-plate chronophotograph, which captures movement in several frames of print. The Cooper Hewitt Library’s copy has all six of the photographic plates in the original paper portfolio. Des Mouvements de l'Homme (Movements of Man) is labeled as No. 1 in the first series, although there were never any more published. This was a gift of John Finguerra in memory of his brother Jim Finguerra.

This volume is a late 19th century set of unbound plates. The paper is brittle and the pages torn at the edges. The wrapper is similarly brittle and torn. The set is housed in a simple card stock folder. Conservators will clean the plates and repair the tears with Japanese paper adhered with reversible wheat starch paste. The plates and wrapper will be placed in Mylar L-sleeves and a custom enclosure will be created to house this fragile item.